Spencer Klavan is among the rising number of gays in the Republican Party whose presence generally elicits nothing more than a shrug of the shoulders among many conservatives and Christians, including Catholics. 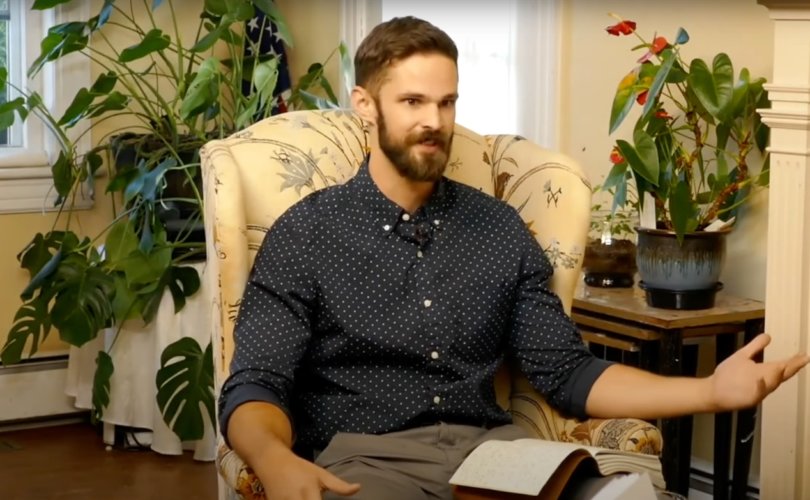 My cmnt: Homosexuality remains a sexual sin but its real damage to the Church and Western culture is the repudiation of the headship doctrine taught by the Apostle Paul and others. Homosexual marriage is an oxymoron that perverts the meaning of marriage in the Judeo-Christian (i.e., Biblical) understanding. Marriage mirrors the relationship between the Father and Israel and Christ and the Church. As Christ is the head of the man so man is the head of the woman. Marriage’s main purpose is to provide a safe, secure and loving home for the wife as she bears children and then cares for them in every way. Marriage is the most stabilizing institution ever known to human society as it provides the context for raising the next generation of children in a nurturing, safe environment. In many cultures women and children are fair sexual game, even within the family, and most especially outside of it.

My cmnt: Even if two Christian men, such as Spencer and his “husband”, adopt children and provide a safe and secure and loving home they cannot mirror God and man in headship and therefore distort the children’s view of God. In the same way divorce destroys the meaning of marriage which is not until one or the other is unhappy, or unfulfilled, or bored, or wanting sex with someone else – but until death do us part.

My cmnt: Every country and society on earth that adopts a new meaning of marriage or forsakes marriage or redefines the natural headship of man eventually stops having enough children to sustain itself. Children are a burden to our autonomy, an enormous expense, require endless time and nurturing, need a long time to educate and mature and often wear us out and break our hearts with ingratitude (How sharper than a serpent’s tooth it is to have a thankless child. Shakespeare).

My cmnt: Yet children properly reared are a heritage from the Lord (Psa 127) and a lasting gift to the nation. Like planting a tree you may never live to sit under, you have provided with your children an irreplaceable gift to the next generation.

(LifeSiteNews) — When I heard that Spencer Klavan would be a speaker at the Classical Learning Test (CLT) 2021 Summit in Annapolis last week, I was surprised — shocked really — that a man who is openly homosexual would be featured there.

The fact that well-respected Catholic intellectuals would also be speaking at the Summit, and that others are members of CLT’s Board of Academic Advisors, was troubling to me, as troubling as the big incongruency in Spencer’s life. I worried that the presence of Princeton Professor Robert George, University of Dallas Professor Jessica Hooten Wilson, and other well-known Catholic educators would give the appearance of approval of homosexuality and same-sex marriage. More specifically, I worried that young, same-sex-attracted Catholics witnessing the gathering would be free to conclude “it’s OK to be a conservative, Catholic, AND an out and proud gay or lesbian.”

Oxford-educated Spencer’s conservative credentials are impressive.  He is host of The Young Heretics podcast, an author at The Daily Wire, associate editor at the Claremont Review of Books, frequent guest on Candace Owens’ show, and son of Christian conservative Andrew Klavan. Yet Spencer has self-identified as “gay” since high school, is currently engaged to be “married” to a man, and was one of the high-profile conservative gays at the Outspoken Pride 2021 gathering in Nashville in September. His future “husband,” Joshua Herr, serves as general counsel for The Daily Wire.

Klavan is among the rising number of gays in the Republican Party whose presence nowadays generally elicits nothing more than a shrug of the shoulders among many conservatives and Christians, including Catholics. The ranks of gay GOP members grew during the 2020 presidential campaign as they enthusiastically supported President Donald Trump, famously touted by homosexual former Ambassador and Director of National Intelligence, Ric Grenell, as “[t]he most pro-gay president in American history.”

A rickety bulwark against criticism of homosexuality and same-sex ‘marriage’

Spencer Klavan is brilliant. A gifted teacher, his podcasts explain what is often impenetrable prose of classic writers that is easily digested by non-academics, while not losing an ounce of the beauty, truth, and gravitas of their messages. As I’ve listened to Klavan’s podcasts and read his commentaries, I confess, I’ve fallen in love with his work. He’s right about so much, but he’s wrong about homosexuality and same-sex “marriage.”

So how can one claim to be a Christian, a conservative, and a classicist?

Klavan began counting himself a Christian at age 16 — at about the same time he “came out” to his famous Dad, Andrew Klavan — and was baptized into the Episcopal Church at age 18.

In a video interview conducted in October 2020, Klavan was asked about the Catholic Church’s teaching on same-sex “marriage” and homosexuality. His brief response revealed the bulwark against personal criticism he has built in his mind.

He explained that natural law theory and the Church’s interpretation of the creation of man and woman in Genesis incorrectly form the basis for Catholicism’s disapproval of gay relationships.

“I don’t think that that is an accurate portrayal of Genesis,” said Klavan. “Obviously things have developed after the fall [of man] in such a way as to permit, to make certain things licit that were not, at least, part of the relationship between Adam and Eve in the Garden of Eden.”

“I think it’s a wrongly-selective reading of Genesis that would say because Adam and Eve are commanded to be fruitful and multiply, a commandment that I affirm, therefore there is no such thing as acceptable, praiseworthy, romantic committed loving partnerships besides one man, one woman,” continued Klavan. “Many of the biblical heroes are polygamists, something that I don’t condone, I don’t condone polygamy, but I acknowledge that there are forms of sexual relationships that go beyond what happens in pre-lapsarian Eden.”

In other words, the fall of man — which separated humanity from God — somehow made homosexuality and genderless “marriages” OK with God, despite the discordance with nature and perversion of God’s clearly visible, knowable intention.

Klavan’s chosen protestant denomination, the U.S. Episcopal Church, began warmly accepting both homosexuality and same-sex marriages years ago, causing a rift with the Anglican Church while also playing a role in the sect’s plummeting membership.

The fact that classic writers appear to uniformly disagree with Klavan about homosexuality has not dissuaded him.

Socrates and Plato were unambiguous in their condemnation of homosexual acts as unnatural. In the Laws, Plato’s last book, the Athenian speaker says, “I think that the pleasure is to be deemed natural which arises out of the intercourse between men and women; but that the intercourse of men with men, or of women with women, is contrary to nature, and that the bold attempt was originally due to unbridled lust.” By its nature, lust is unbridled, irrational, and therefore destructive of what it is to be human. Giving in to it is therefore dehumanizing.

Socrates said that a certain man was “no better off than a pig if he wanted to scratch himself against a [young male] as piglets do against stones,” Reilly further noted.

C.S. Lewis, the Christian apologist who Klavan views as the “greatest intellectual of the 20th century,” also disagrees with him about homosexuality. “The physical satisfaction of homosexual desires is sin,” wrote Lewis in a letter to a former student.

The relentless seeping in of homosexuality in Catholic education

“There has never been a better time to invest in the souls and minds of our nation’s kids!” exclaimed CLT 2021 Summit participant, Tony Kinnett, in a tweet.

It was a pleasure getting to meet & speak with the venerable @andrewklavan at the @CLT_Exam Summit.

There has never been a better time to invest in the souls and minds of our nation’s kids! pic.twitter.com/a04TxXCOgx

While the effort to steep America’s young people in the classics is admirable, does living as a homosexual with the intention of “marrying” a member of the same sex undermine that effort, risking the corruption of their “souls and minds?”

Does Klavan’s presence at the 2021 Summit create a problem for Ave Maria University, Christendom College, Franciscan University of Steubenville, the University of Dallas, and Hillsdale College, which are among the 204 schools that recognize the CLT? The incongruities of his life stand in opposition to the fundamental truths these institutions hold dear.

The Catholic school superintendent of Denver, Elias J. Moo, was another featured speaker at the CLT summit; Michael Moynihan, head of the Upper School at Opus Dei’s prestigious The Heights School in the Washington suburbs, is on CLT’s Board of Academic Advisors, as is Catholic University of America Professor Chad Pecknold.

The seeping in of homosexuality into conservative circles, whether it be within the GOP, the Catholic Church, or conservative education institutions, continues with little notice.

In February 2020, Fr. James Martin, S.J. — the most prominent clergyman arguing for the normalization of homosexuality and transgenderism within the Church — was “warmly welcomed” as he addressed 150 Catholic college and university presidents, urging them to promote “inclusion” on their campuses by promoting “LGBT-affirming liturgies,” permitting students to choose their own pronouns, and holding “Lavender Graduations.”

Klavan is not alone. Ambassador Grenell, FOX News commentators Guy Benson, Deroy Murdock, and Chadwick Moore, “Walk Away” movement founder Brandon Straka, outspoken pro-Trump activists Scott Presler and Christian Walker, and others — although brilliant, successful men — have not yet tapped into the intellectual curiosity and honesty necessary to reject the “born this way” lie that now defines them. Homosexuality remains a stumbling block, stalling their trajectory beyond political truth toward bigger, preeminent ones while also undermining their attempts to supplant liberal insanity with conservative principles.

In this way, their personal lives serve as obstructions, hindering the flow of maximum truth into the world as they continue to resist both science and nature. They cling to an impoverished self and worldview, leading to diminished personal lives and contributing to our pauperized American culture.

Klavan and the others could learn a lot from the intellectual honesty and integrity of Milo Yiannopoulos, who has left the world of sodomy and the cortege of lies and partial truths that follow in its train.

Yiannopoulos has accomplished more good during his year and a half as a chaste, dedicated follower of Christ than he was ever able to during his years as a famous gay conservative provocateur.

Doug Mainwaring is a journalist for LifeSiteNews, an author, and a marriage, family and children’s rights activist.  He has testified before the United States Congress and state legislative bodies, originated and co-authored amicus briefs for the United States Supreme Court, and has been a guest on numerous TV and radio programs.  Doug and his family live in the Washington, DC suburbs.

One thought on “Homosexuality is being accepted in prominent conservative, Christian circles. Here’s proof”