The affable demeanor of Warren Buffett is not what one might expect when picturing one of the world’s most hard-nosed and successful businessmen.

But neither is the image of him bursting into tears mid-interview when discussing his first wife, Susan, who died of oral cancer in 2004.

Their relationship was always an unconventional one more akin to Hollywood than that of his hometown of Omaha, Nebraska.

For after marrying in 1952 they stayed as husband and wife despite her moving away in 1977 and him forming a relationship with a close friend of hers.

Mostly happy guy: Though he is generally upbeat, the subject of his first wife’s death brings Mr Buffett to tears

Loving wife: Just two months before she died in 2004, Susan Buffett spoke about her love of Warren and their unbreakable bond

Susan died of the cancer in 2004 and it was talking about her that brought the business titan to tears.

‘Her death is – it’s just terrible. It’s the only thing that’s really up there,’ Mr Buffett said in an interview with Time Magazine.

‘I still can’t talk about it,’ he said as he cried for several minutes.

Mr Buffett met Susan at an early age, when she was headed to college to be his younger sister’s roommate at Northwestern University.

‘He made some sarcastic quip – I hadn’t even met him – so I made one back and I thought “Who is this jerk?”’ Susan said in a 2004 interview with Charlie Rose. 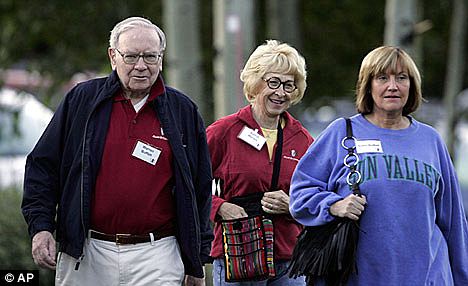 The new group: Warren and Astrid Buffett walk with his daughter Susan who hosted their 15-minute wedding ceremony at her Omaha house

Mr Buffett then pursued Susan and she eventually relented, leading to a marriage in 1952. The couple had three children- Susie, Howard, and Peter- and lived in Omaha as Mr Buffett grew his business, Berkshire Hathaway, into one of the country’s biggest investment firms.

Then, in 1977, Susan decided that she wanted to move away in an effort to pursue her own life and a career as a singer.

‘You know I would like to have a place where I could have a room of my own,’ she said in the interview with Mr Rose.

Before she left, Susan told her friend Astrid Menks to check in on Mr Buffett during her absence, saying that his financial savvy did not always translate into social skills.

‘I called Astrid. I said “Astrid, will you take Warren, make him some soup, go over there and look after him?”’ Susan said. 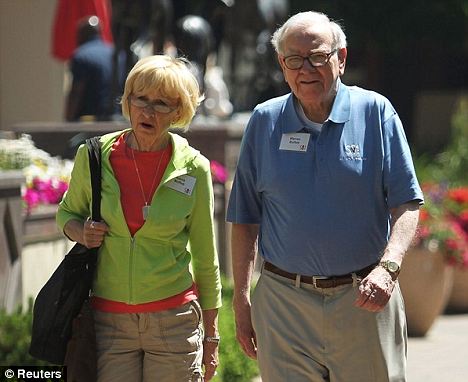 Bright future: Astrid and Warren got married in 2006, two years after Susan died and almost 30 years after they started their relationship. 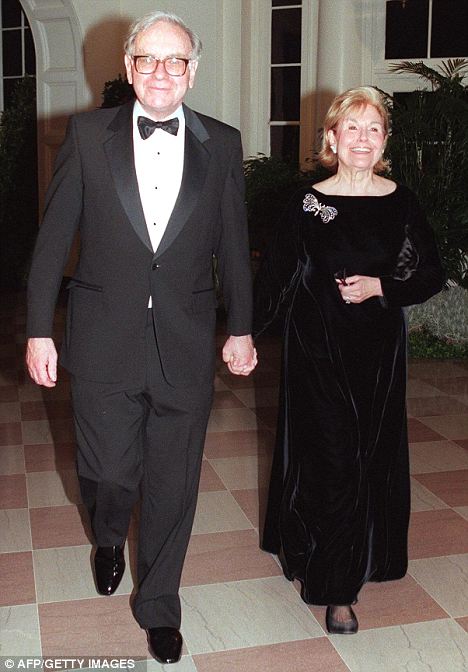 Life partners: Even after Susan (right) moved to San Francisco in 1977, the couple stayed as close as ever and never split up

Astrid and Mr Buffett then started a relationship, and that was fine by Susan. All three were very aware of their set-up and it seemed to work happily for all parties involved.

They even sent out joint Christmas cards every year with their three names at the bottom.

The most recent tears that Mr Buffett shed over Susan are certainly not the first, as he was known to cry for hours during her prolonged battle with oral cancer. 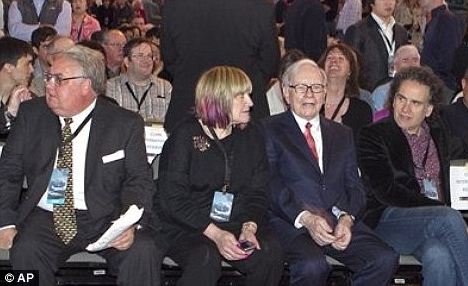 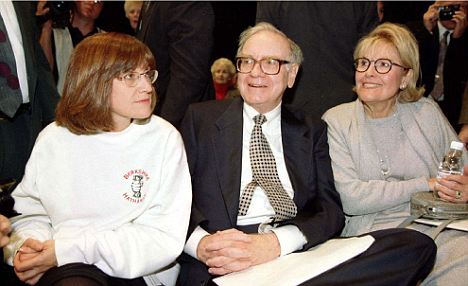 One big, happy family: (L-R) Buffett’s daughter Susie sits beside her dad and mom Susan at a business function in 1997

During her treatment, when she could not eat solid foods, Mr Buffett would cut himself down to 1,000 calories a day in solidarity, and would sit with her and watch episodes of Frasier in the San Francisco hospital room.

He could not force himself to attend her funeral because he would become too upset thinking about her and trying to keep a brave face.

Mr Buffett frequently attributes his success and his political consciousness to Susan, which can still be seen today as he continues to champion the cause of getting the super-wealthy to give back through charity and involvement in government. 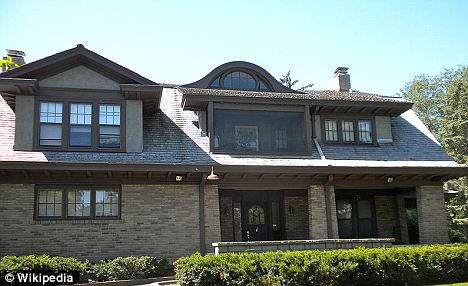 Living arrangements: When Susan moved to San Francisco, Astrid then started a relationship with Mr Buffett and the three were all very happy.